Wing Repair - Should we always expect it?

General discussions about wingfoiling: equipment, tips, problems, where to go, where you should have been, pump safety.
Post Reply
8 posts • Page 1 of 1

Wing Repair - Should we always expect it?

Still winging and digging it...season 2. I have some new foils per the progression thread (also have extra Armstrong pilot hole screws and an entire upgrade kit in case anyone wants to go from A -> A+, also have a long story on a drill hole that didn't line up but will save that for another thread or a tale in person).

Was out on a 3 m Slick today that I got earlier this year - 3rd session with this wing and windiest session of all. Was on an 88L board with the HA925 foil. I think at times gusts were getting slightly above 40 kts and I turned turtle 4 times. The first three times I was quite concerned (as I had two wing repairs last year from on the water foil-canopy contact), but remedied the situation quickly. The fourth time my whole board and foil got blown on top of the wing (damage in attached photos). Another trip to Paul Betts. Didn't winddoc talk about a punch card? Free coffee?

Is this just something a wing foiler has to accept? Eventual foil-canopy contact? Even as one progresses? I was hoping to avoid this mostly this year but now I've damaged a third wing. Turning turtle in strong winds was not re-assuring. Luck ran out but boy it was fun. 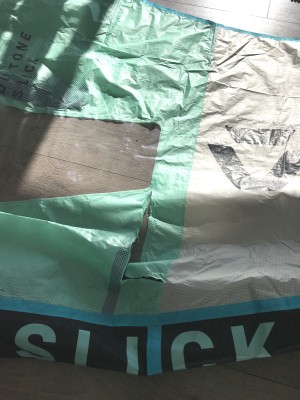 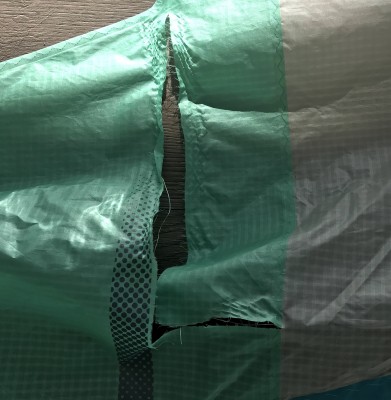 I wonder if longer mast = lower likelihood of foil coming up. Maybe also mast design. For example, the Slingshot I used to use -- I could push it sideways through the water fairly easily, like when maneuvering the board in the water before climbing back on. With the Axis I now use, even when I temporarily had a shorter 70cm mast, it was really hard to push sideways through the water. This might mean the chances of it rolling up in a bail is reduced. Could be wrong!
I haven't had a foil put a hole in my wing yet, but my closest moments have been getting in and out of the water.
Back to top

Have never punctured a wing, not even sure how that is. My board flys off spinning on botched jumps and sometimes lands on the wing. For the board flipping upside down, and wipeouts I'm sure the long leash has saved me many times. I use a modified coil leash attached to the dog leash clip on the reel leash. In an high speed crash it will stretch out to over 20ft, but doesn't drag while riding. If the board does flip upside down, downwind of you. Grab the wing and start swimming sideways away and around the board until you're downwind.

I think the punctures are more likely in the beginner stage, less likely intermediate, then will come back again as you get into freestyle or bigger conditions. Sounds like you lucky bastards down in Vic get huge conditions all the time! So no getting around it. I'm not upgrading my wings this year, saw a really smooth backloop at the last gwa event that I just have to try this summer. Expect a few tears. Usually I find the freestyle stuff is working against the wing, but this xover-windsurf champ kept it powered and stalled out. Check it out (0:22)

I try to not let go of the wing when I crash and find that helps. Don't let it go and have it flailing on the end of your leash. I had lots of wing carnage when I was learning but definitely less now. I would say don't expect wing damage, but don't be too bummed when it does happen, especially in 30-40 kts. I had the board blow over my head on a crash yesterday and it somehow didn't kill me or the wing.

For smaller punctures and rips (up to 12" or so) this stuff works really well and now if I get a rip, I just clean and dry the wing and repair it in about 10mins... so no big deal. It is strong and the repair looks semi-pro:

You could definitely repair the rip in your photo with kitefix.

For larger repairs, or in areas where large seams are torn definitely use Paul or CKR.
Back to top

This aspect of winging really sucks! The HA foils are basically skewers and there's not much you can do to prevent tears in the wings in big yard sails. The light weight of the Armie foils is partly to blame I'm sure. Last session my board flipped 3 times and I narrowly missed my new 3m getting stabbed. For me it happens more often when I bail and the board shoots upwind with me still holding the wing (I try not to let go of the wing) and then the upturned board flips and tomahawks the wing before I can do anything to mitigate it. The 3 foil/wing- attempted assaults this last time occurred when the board flipped downwind of me and then my reel-leash mindlessly and cheerfully started hauling the foil back towards my wing as I let rapid little high-pitched "No No No No!!!" sounds out of my mouth. I only avoided it by swimming cross-wind and even then it was close! I'm curious to know when we'll all be riding kevlar or chainmail wings?
Poultry in motion
Back to top

Thanks for all the insights, much appreciated. I'll look to get some kitefix. I'd used this already https://www.gearaid.com/products/tenaci ... 8044148817 (the ripstop version) on another wing.

It was interesting being in those stronger winds yesterday (a first for me - was more used to Nitinat from last season) and how it just pushes the board and foil around, if free in the water. It is somewhat just survival sailing for me, sheeted out with a 3 m wing and foiling upwind/downwind (slightest amount of sheeting in and I was overpowered). I rarely, if ever, let go of the wing - normally crash hanging onto the boom, then grab the LE handle. In this wipeout the board was upwind of me and the whole board and foil got blown up, over the LE, and foil touched the canopy (maybe the tomahawk? - all happens so fast it is hard to know). Simply wasn't fast enough to move the fast moving board out of the way. Can't be bummed as it was such a glorious day, but is a shame for it to happen on the third use of the wing. Can still feel/hear the newness of the wing/canopy. Wing is already at Paul's for repair. Onwards!
Back to top

That's a sad reality in winging, it's not if but when.

As BWD said, most common in beginner phase, then you figure out ways to minimize it, avoid the avoidable. Not as frequent later on, but if you are pushing it with conditions or moves, you will inevitably fall uncontrolled and at that point the dice are rolled and snake eyes will eventually come up. High winds and breaking waves especially.

Winging is so much harder on the gear than kiting ... with inevitable damage and with quick wear, these are really expensive disposable toys. With care a kite could last 5 years +, but I expect most of us will be cycling through these a lot faster. If you go into it knowing that, you avoid disappointment. :-)

But wings also have less force on them than kites, so home repairs are much more effective. You can use kitefix as BWD suggests or even just strong tape, and smaller tears will likely hold. Leading edge repairs need pro fix, though at the moment I am rolling along with two small allula patches hoping for the best.
Back to top

Can confirm! New wing, used for about 10 minutes before this happened.

I hope North Sails has that colour orange for the repair. 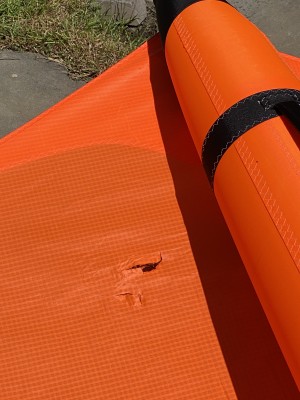