General discussions about wingfoiling: equipment, tips, problems, where to go, where you should have been, pump safety.
Post Reply
11 posts • Page 1 of 1

Hey guys. So far I've been wingfoiling with my windsurf harness. I don't really mind the bulk, and it saves my arms when going upwind, which I need to do a lot because I suck and end up downwind often

I tend to ride the wing like a typical windsurfer, cruising around (now with more upwind range) instead of surfing waves, and the harness is really beneficial in this mode.

One aspect of this has been really annoying me – unlike a windsurf sail, the wing moves around vertically quite a bit, sometimes you want it lower down, other times higher up, depending on wind and where you're going. The problem is, because my harness hook is way below my chest, the ideal length of harness lines varies depending on the wing position: when the wing is low, you need shorter lines to keep tension in them, when the wing is higher up, you need longer lines or else the wing will be too close to your face. So I have to set it for something average, and then get annoyed at the lines falling off the hook or my arms not being long enough.

I've been thinking to make some kind of custom harness where the hook would be at the chest level. That way the harness lines would be more inline with your arms (instead of forming a triangle between your arms, lines, and the hook), so this should reduce this problem. I'm not sure if it's a good idea, but might be worth a shot?

I'm wondering if anyone has done something similar, or just in general what are your thoughts on this?

I looked at various specialized winging harnesses, but they all seem to be designed for the waist, just like windsurfing harnesses (but with less bulk). Not sure why. Maybe I'm missing something. Mostly I think it's because other people usually wing to surf waves, which doesn't really require a harness. But aside from getting tired when going upwind, I just want to get more of this locked-in windsurf feel, instead of worrying about my harness lines falling out.
Back to top

Way, way back at the very beginning we had chest harnesses. Like a life jacket, your arms go through straps and it buckles at your chest along with the hook. It should work for you by the sounds of your requirement. The hook is on a plate only about 3 inches square, haven't seen one for a long time. Seems like a good plan though. Maybe you'll bring 'em back.
Last edited by jim mckenzie on Mon Nov 15, 2021 11:34 am, edited 1 time in total.
Back to top

I may have a chest harness in the bottom of a tote. Won it racing longboards in 1981.

Yeah I think they would work, but the originals were just webbing going to a hook with webbing slots on a plate. They must have had a quick release given we were using simple braided rope without even tubing to stiffen it. Not for use in surf!!!!
Back to top

I made a diy out of 4" webbing, with overlapping 4" velcro stitched to it. Then stitched a 1.5" x 14" webbing with NSI wing ding hook across the front that allows the NSI hook to slide from side to side. Sits about at the bottom of my sternum. Loved it in the summer, pointless in the winter. But I only used it for 6 sessions then the leash attachment on my wing ripped out (Thanks CKR for the repair).

The velcro never budged, my crudely stitched 1.5" webbing slider never ripped and the 4" webbing is plenty of support if you've got an impact vest underneath. Wings don't pull even 1/10th as hard as a kite, so no need for a carbon fiber reinforced harness taking up half your back.

One other thing I noticed is that as you go down in foil size, there's significantly less hand kite pull on your hands since the power in the wing gets transferred into speed vs drag of bigger foils. An extreme example would be riding a 25L surfboard with a wing. Kai Lenny called it "an arm pump." Between switching to a faster foil and having to navigate head high swell upwind and flagging downwind, I find there's no point in a harness this time of the year. And maybe not in the summer either as a lot of us will be down around the 6-900cm2 foils by next year.
Back to top

Heh, everything old is new again I guess. Couldn't find any photos online of those chest harnesses, but I can imagine from your description.

Good to know that smaller foils produce less sail pull. That makes sense. Currently I'm on a 1550 cm^2 front wing, going down to 1250 and maaaybe 1050 next year.

Here's what I'll try – put a harness hook on a waist belt and just put in on higher up. Hopefully I'll be able to attach both wing and board leashes to this same belt without much interference, but if not, then I'll keep them on another waist belt. I know I could've used a more minimal hook, but this is what I have lying around. The plastic hook would cost $65 USD incl. shipping. If this works maybe I'll upgrade to something like this, but I don't think it will fit over the chest and over the impact vest, since it's designed for the waist. 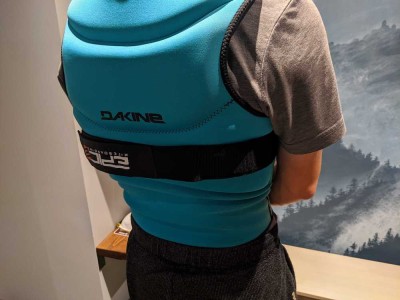 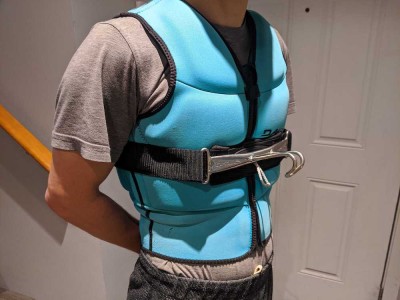 That'll work perfectly when in harness mode. But might get in the way paddling in/out. And the board leash might pull it down, which would be hard to get back up out there. Might want to go back to a wrist leash for the wing and calf for the board until you're certain the harness belt will stay up there.

I'd try a 1125 or 925 before you go for a 1250/1050. The thin HA wings are much more forearm friendly. Was out on the Sabfoil w1000 (similar to 925) today and zero forearm pump, even with 3mm gloves. Although I did weaken my gloves at the proximal interphalangeal joint with a soldering iron. Which allows your fingers to bend freely.
Back to top

Thanks, good point, one more reason to attach leashes to a separate waist belt. I will be the king of belts.

I thought about HA foils, but I don't feel very safe with them being so wide and pointy, and even though they glide better they also have drawbacks, overall harder to use for noobs, even if not significantly so. My skills aren't there yet, and anyway windsurfing is still the plan for real high wind. The 1250 is a newer mid-aspect design compared to both the current 1050 model and my v1 1550 so it should be a nice improvement already. I will re-evaluate my opinions on HA foils after I try the 1250 at least. Maybe they'll come up with a newer mid-aspect 1050 by that time...
Back to top

Guys have cut minimalist hooks out of thick cutting board and report they hold up very well plus slide to the side easily. Would be a low cost experiment.
Back to top

I remember hearing in a video from the most recent AWSI trade show that the wings only put like 7 Ibs of pressure on the hook so the harness doesn't need to be very robust. Cutting a hook out of HDPE/ cutting board is a great idea!
Back to top

Except when you blow up at high speed hooked in. Your body drops well below the water while the wing stays at the surface. The higher hook should help with that, but it's still hard on the wing. My strike only made it 6 sessions before tearing the strut dacron.
Back to top

Thanks, I didn't realize that could be a problem. I wonder if a weak link on the harness line would work to prevent damage to the wing (since there isn't much pressure in normal operation).

I'm currently using windsurf harness lines which can velcro to the wing's handles without needing to uh... "take the boom apart" in windsurf terms. With such construction, if the velcro were to slip, the lines would detach from the boom / handle. But the velcro is very strong. Maybe I can weaken it on one side, so that it disengages when (let's say) ~15kg force is applied.

Then it will stay engaged under normal sailing conditions, but fail and disconnect in case of crash. I don't think you're supposed to jump hooked in on a wing, so no problems there either.
Back to top
Post Reply
11 posts • Page 1 of 1